A few days ago, I was driving through Maple Ridge, and on the North-East corner of 227th & 119th, I saw Big Feast Bistro & Catering, which had tweeted about their Grand Opening a week or so earlier.  As it was lunchtime, I felt compelled to go and do some “research” !!! 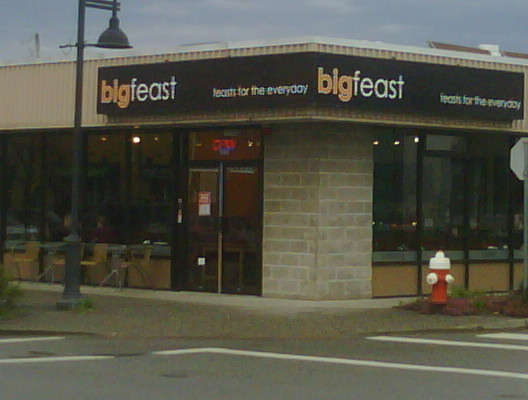 Located right on the corner, it has lots of windows, and a bright, airy venue inside.  There are eight or nine tables of varying sizes inside, and a couple of bistro tables outside for nicer days.  There was a generous amount of space between all the tables.

I walked to the front counter, and was greeted by the Chef, who happened to be passing by.  As all the other Staff were busy with customers, he led me to a table, took me through the Big Feast menu, and said one of the Servers would be with me shortly.  Prices for breakfast appeared to start at $6 and the lunch entrees seemed to start at $11.

Sure enough, a few minutes later, a young lady appeared, asking if I was ready to place my order?  There were choices for Breakfast or Lunch, and, after some serious deliberating, I chose the “In House Pepper Crusted Roast Beef Panini with Blue Cheese Crème Fraiche, Carmelized Onions and Arugula” with a side of “Citrus Infused Fresh Fruit Salad.”  For a drink, I decided to go with “English Breakfast Tea.”  She left, and I took another look around my table.  The Bistro was quite busy, with most of the tables being occupied.  There were four Servers, plus the Chef, from what I could see, and they were all friendly, and, it seemed to me, the perfect balance between attentive and obtrusive.   In one area, tucked in a corner was a small play area, to keep children occupied.  There was bright music playing softly enough that it didn’t cause the murmur of customer conversation to raise itself in competition.

Before I had a chance to look any further, my Tea was back, and although I was by myself, it came in a large pot, which was delightful.  I had barely finished putting the bag into my pot, and sugar in my cup, when my sandwich arrived.

First bite, and I was in Heaven.  I cannot recall a time when I have SO enjoyed a sandwich, as much as I enjoyed that Panini.

I was raised to mind my manners, and when in restaurants, I TRY to behave better than I sometimes do when I am at home… but there was nothing for it… I took my finger, and licked every drop of the Blue Cheese Crème Fraiche off the plate!  (And I raised my Fruit Salad cup in toast to Chef Mike.)

So, if you are out and about, in Maple Ridge…

Their tag line says “Feasts for the everyday”.  Check it out, it will be well worth your while !!!