My first real tangible memories, are the touchstones of the times.

The NASA missions to space, and to the Moon. 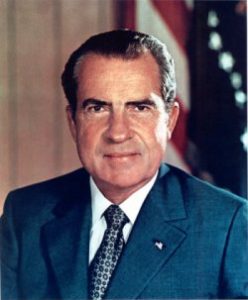 My father worked for local radio stations and then the Canadian Broadcasting Corporation (the CBC), and our home and dinner table was often a gathering place and nexus for discussions regarding arts, science, politics, music, and other current events that were in the zeitgeist.

I was very young, and viewed the world with a black and white sense of idealism, that had no sense of the many shades of gray that lay between the two extremes of right and wrong.

So, I had no sense of understanding for my Father, who, after a long year of working, would choose to spend our holiday time in Penticton, in front of a TV set, watching the Watergate Hearings, rather than spending time enjoying the local lakefront.

Cut to current day, where my wife and I scan the headlines, morning and night, to find the latest development, with an American President who seems to have lost his moral compass, is openly dismissive of the Press, and have a measured disdain for minorities…

It was further brought into focus, by watching the CNN show “Tricky Dick” – a series of four programs that, using ONLY footage and audio from the Nixon era, presented the timeline of Richard M. Nixon’s rise to power, and fall from grace.

It seems that many, back then, did not recognize the signs along the way… and looks like many US citizens are repeating a lesson they did not learn the first time.

“I cannot accept your canon that we are to judge Pope and King unlike other men, with a favorable presumption that they did no wrong. If there is any presumption it is the other way against holders of power, increasing as the power increases. Historic responsibility has to make up for the want of legal responsibility. Power tends to corrupt and absolute power corrupts absolutely. “