My parents emigrated to Canada in 1956, from Scotland.  They didn’t know anyone here, but my Uncle John in Liverpool had traveled the world, working on ships, and his endorsement of the beautiful city on the Pacific, tipped the scales for Vancouver over Montreal.  Dad thought he could find a job in broadcast radio in Vancouver… so he and my mum packed up their lives into a couple of steamer trunks, and with two young daughters in tow, set sail for Canada, leaving all relatives behind.

A few years, a few houses and a few different jobs later, my Parents had me.

To me, when I was a little kid, the word Family meant my parents, and my sisters.

My parents made many friendships in their newly-adopted country, and growing up, we called most of these people “Aunt” or “Uncle”.  As I grew a bit older, I learned that these people weren’t actually related to us, but were Aunts and Uncles “in name only”.  I also learned that there were OTHER people I talked to on the phone on Christmas Day and sometimes heard, on exchanged reel to reel tapes, who I was related to.  They were the ‘Overseas Relatives’.

As a teenager, my Mum and I went to meet the ‘Overseas Relatives’, and spent three weeks meeting Aunts, Uncles and Cousins… all over Scotland and England.  Being a typical teenager, I wore the unfortunate cloak of being self-absorbed, while lacking in both self-confidence and self-assuredness. Quiet and shy would be an understatement… so I busied myself behind the lens of a camera, taking pictures.  After that trip, I was able to match faces and personalities to the Overseas Relatives. During my teens, there were also a few trips by various Overseas Relatives to Canada.

Later, when I got married, my Family more than doubled when I was embraced by my wife’s family.  Through the following years, our Family also grew to include four lovely nieces.

Then the growth stopped…  My Parents both passed away… and Lorie’s long list of Aunts and Uncles started dwindling.  At the same time, the Overseas Relatives were diminishing in numbers, as my Dad’s two siblings and my Mum’s four siblings slowly succumbed to age and diseases.  Until all were gone, save my Mum’s brother John. 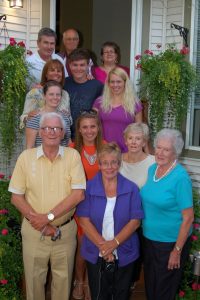 Uncle John turned 80, last April.  He and his wife, Aunt Patricia had been very kind when I went to Liverpool as a teen.  It had been Uncle John who, when I went with my Mum to see my Grandmother, Sybil, for the one and only visit, after 15 minutes, took me for ice cream, as it was apparent (even to my teenage self) that Sybil was more interested in the Wimbledon Tennis results on her TV, than in talking to me, as she had placed a wager on the results.

After Uncle John’s recent birthday, John and Patricia’s son and daughter-in-law – David and Louise – started making arrangements for a family trip. So, this is how six of the Buchanan clan: Uncle John, Aunt Patricia, David, Louise, and grand kids Rebecca and Luke, came to be in Vancouver, for a visit.

From the first greeting at the airport, there was an immediate comfort, warmth and ease talking with all of them…  and lots of laughter amid the “getting to know” everyone.  I have always known that the Buchanan men have a distinct “look”… deep-set eyes and black hair that turns gray early… and I can now “see” myself in Uncle John, David and Luke, and them in me.

It had been 31 years since the last time Uncle John, Aunt Patricia and David had been been to Vancouver… and now Luke is the age David had been, and David was the age John had been on their last visit. Someone saw a photo of their last trip, and said each could pass for the generation that followed.  I am also older than the last time they visited, by 31 years… and I’m sure, no wiser.

But I know that these people stepped off the plane as Overseas Relatives, and are leaving today as Family.

Family is a Relative thing, and today, some of my Family are leaving town.

I wish them a safe journey, and look forward to seeing them again… hopefully soon !!!