Voting in the Pitt Meadows Municipal election is important. Your City Hall represents you, at the most immediate level… and you want people there who are hard-working, involved, responsive, and engaged in their Community… and not just engaged in in-fighting and bickering. (See our neighbours to the South)

Getting elected for office is more than just a 9 to 5 job. It is an evening and weekend gig, where showing up and representing Pitt Meadows, matters. 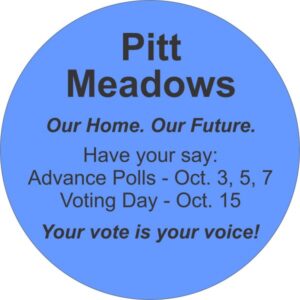 Lorie and I voted today.  On the way to the Polling Station, we saw a group of Candidates out, holding signs, and encouraging folks to vote.  Maybe it is because I have been involved in multiple campaigns, over the years, but that reinforced the choices and decisions I had made through research.

Folks who show up, who are engaged in their Community, who turn up at events in both good and bad weather, who share (on Social Media) what is happening at Council Meetings, who know what a wonderful place Pitt Meadows is, but are still working to make it better.

Some Candidates are running for their own reasons. I say that, because it isn’t clear what they are going to do, you can’t find their platforms or plans anywhere, and they are nowhere (physically) to be seen. It is wonderful that they are engaged in the election process, but, in my opinion, door-knocking and engaging with voters, shows who will “show up” and represent our City.  Putting out a couple of signs, isn’t enough.

I also believe it is important to have a mix of older experienced Council Members, mixed with fresh new energetic Councilors.

We know Nicole MacDonald will be our next Mayor. (She was acclaimed, as she ran un-opposed.)

What DOES matter, is that you do your research, find the Candidates that are addressing the issues YOU are concerned about, and vote for them.
You can find more information about WHERE, WHEN and HOW to vote, at: